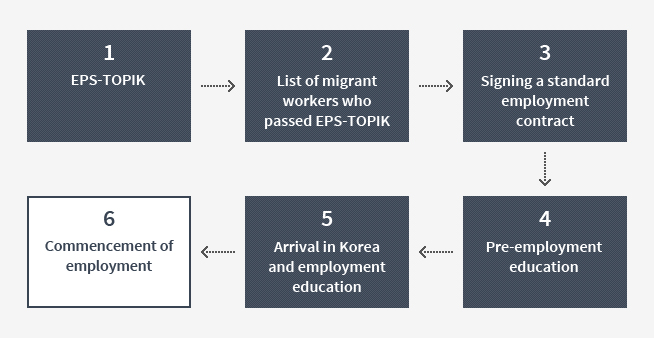 Since August 2005, the Human Resources Development Service of Korea (HRD) has administered the Employment Permit System-Test of Proficiency in Korean (EPS-TOPIK) to recruit migrant workers more fairly and transparently and to help them adapt to life in the country as quickly as possible.

Eligibility to sit the test

The HRD makes and manages the list of migrant workers who have passed EPS-TOPIK and applied for jobs after review to confirm that each of them meets the basic requirements.

5Arrival in Korea and employment education

Migrant workers should obtain an E-9/Non-professional employment visa from the ROK Embassy in their country and leave for Korea under the guidance of the worker-dispatching institution. Upon arrival in Korea, they are obliged to attend a 16-hour (3-day) education session.

Each migrant worker is taken by the future employer from the education facility, whereupon the term of employment commences.

Justifiable reasons for transfer to another workplace

※ No persons other than the personnel of the employment support center should be involved in the selection, introduction or recruitment of a migrant worker. A person who violates this regulation is punishable with imprisonment (with/without hard labor) for not longer than one year or a fine not exceeding 10 million won. (The Act on the Employment, etc. of Foreign Workers, Article  29)