The “Sinchon Play Bus,” a musical bus with a background story, made an appearance on December 6 at Star Square on Yonsei-ro in Sinchon, Seoul. 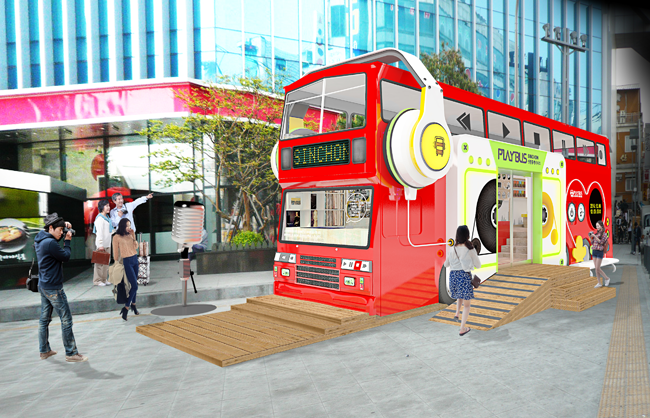 This unique bus is a remodeled double-decker bus that has been decorated with stories from various parts of the Sinchon area using musical elements. The interior and exterior of the Sinchon Play Bus was designed under the themes of music and “Sinchon story,” so that visitors of all ages, despite the decade they grew up in, can enjoy it. It also serves as a new landmark and source of tourist information for both Korean and foreign visitors.

The “Sinchon Play Bus” was created in 2014 at the suggestion of Seoul Mayor Park Won Soon, who wanted to create a tourist attraction specific to Sinchon.

First, the exterior of the double-decker bus was outfitted with huge headphones and a cassette-tape door, photo zone, and small stage, while the interior was designed with musical elements that describe the history and culture of Sinchon. The interior is divided into three sections titled “Welcome to Sinchon,” “Musical Experience in Sinchon,” and “Sinchon Story”. ① “Welcome to Sinchon”: This section contains an information desk equipped with leaflets about tourist attractions and performances. There is also a video guest book where visitors can leave interesting video messages or send videos to the email accounts or cell phones of their loved ones.

② “Musical Experience in Sinchon”: This section includes a DJ Box for Professionals, DJ Box Photo Zone, and a personal internet broadcast program. The DJ Box, which is a recreation of DJ boxes from the past, is a studio installed with professional DJ equipment where professional artists can perform. Furthermore, there is also a space for uploading internet broadcasts, allowing people to broadcast their personal programs at any time. In the future, DJ performances and personal broadcast programs will be available for applicants, and it will also be used as a photo zone. In addition, there is a lounge that serves as a gallery and a place for visitors to listen to music, as it contains about 150 CDs and LPs. Visitors can listen to the music of singers and musicians who have connections to Sinchon, such as the Sinchon Blues, Han Yeong-ae, and Sunflower, as well as various Indie musicians, including Epitone Project, Casker, and Han Hee-jung.

③ “Sinchon Story”: In this section, visitors are given an overview of Sinchon through a graphic wall, which shows the scenes and tells stories of the past and present of Sinchon. It also introduces popular music that contains references to Sinchon under the themes of “Romantic Sinchon Station of the Past,” “Sinchon Rotary, the Street of Youth,” “Sinchon, a Cultural Haven", and “The Youthful Universities of Sinchon”.

In particular, Yonsei-ro is the first road in Seoul that has been designated as a “Public Transportation-Only Road”, and in the latter half of next year, it will become a pedestrian-only area. By attracting tourists and hosting cultural and artistic performances in Star Square, this space will be the focal point of the revitalization of the Sinchon region, which is much desired by the residents and merchants of Sinchon and its neighboring areas.

The Sinchon area is a romantic and nostalgic place for those who spent their youth there in the 1970s and 80s as well as a trendy place for today’s youth. Focusing on the unique characteristics of the Sinchon area, the “Sinchon Play Bus,” under the theme “Music Bus,” was created by the Seoul Metropolitan Government after collecting the opinions of local residents and conducting surveys of the preferences of Seoul citizens.