More opportunities for citizens to express their opinions 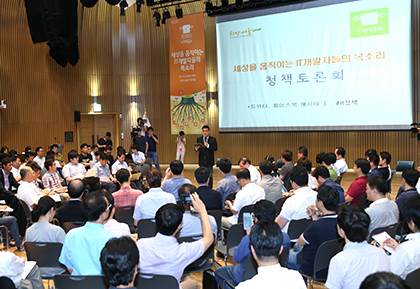 The Listening Policy Debate, which is designed to listen to citizen opinion and reflect it in policies, arose as a representative governance platform. From November 2011 to November 2014, a total of 90 debates were held and attended by 12,357 people. Of the 1,546 suggestions and opinions received, 1,169 (76%) were reflected in policies, proving the Listening Policy Debate’s role as a communication channel between Seoul and its citizens.

The Citizen Speaking Podium, which is located on the basement 1st floor of Seoul City Hall, is an open space for everyone to express their opinions freely. The Visitor Speaking Podium has been in operation since May. In addition, the Honorary Vice-Mayor system and the One-Day Citizen Mayor system are the channels for the city to be able to listen to citizens from all walks of life.Twitter and Facebook, along with other SNS’ for Seoul, are the favorite real-time communication channels to citizens. Seoul has opened an SNS administration era in order to be able to receive citizen opinions and to be able to share the results of how complaints were dealt with through 44 SNS accounts. It is also operating a Social Media Center, which has been designed to allow citizens to write down their comments on different policies.