The Seoul International Complex is a project, spanning from 2014 to 2023, to build an extensive complex, covering an area of 720,000 square meters from the COEX to Jamsil Sports Complex, for the purposes of international business, MICE*, sports, culture, and entertainment. It is expected to become a core facility of Seoul’s future and a global destination.
* MICE: Meetings, Incentives, Conventions, and Exhibitions

In the “2030 Seoul Plan,” announced in 2013, the Seoul Metropolitan Government designated the Gangnam area as one of the three main pillars of Seoul’s effort to increase its competitiveness on the global stage. Seoul has established a long-term goal to transform the area from the COEX to Jamsil Sports Complex into a center of international business and the MICE industry, the heart of Seoul’s economy, and a major engine of the city’s growth. 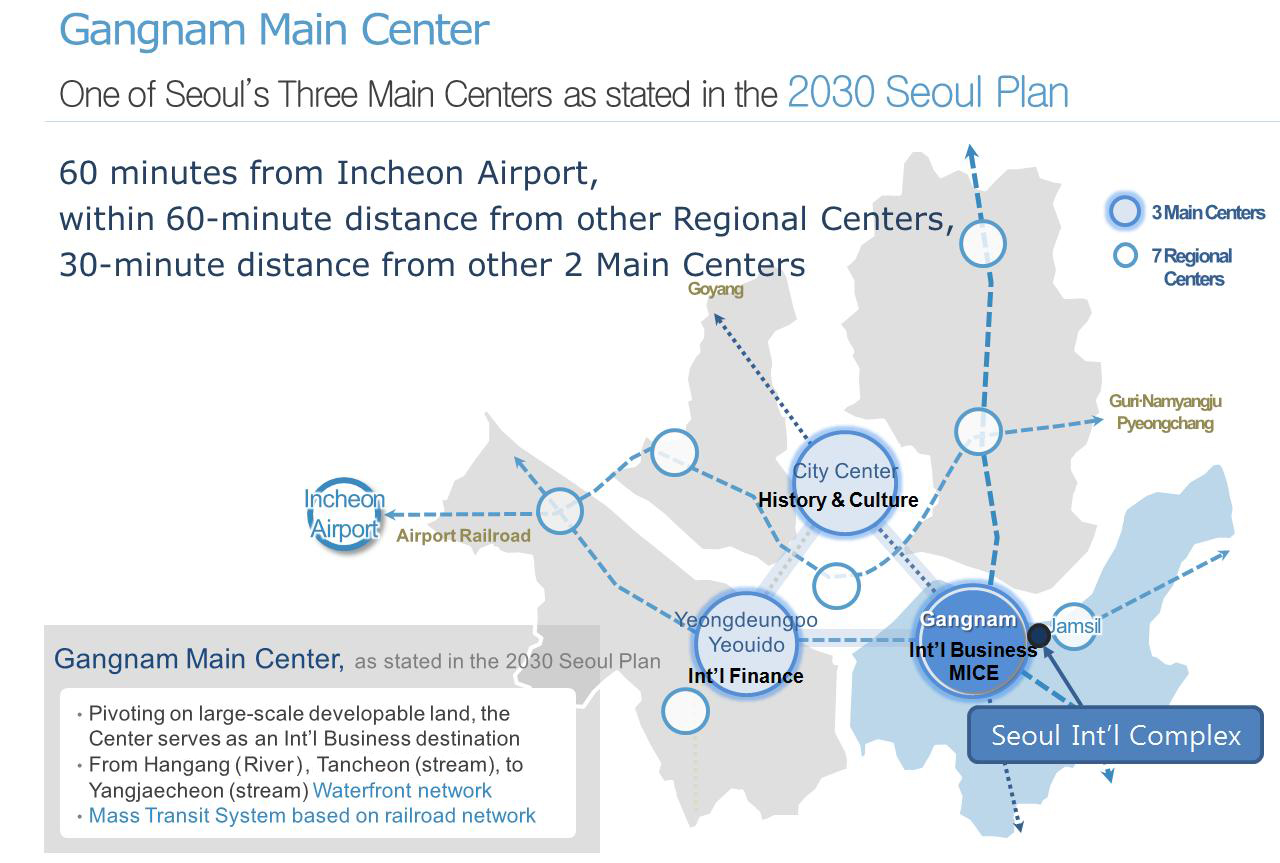 The tract of land where Gangnam meets Jamsil is home to numerous attractions, most notably, the COEX, Korea’s first exhibition and convention facility; the Jamsil Sports Complex, which was built for the 1988 Seoul Olympics; and its beautiful natural environment and rich historical culture, including the Hangang (River), the Tancheon (Stream), and Bongeunsa (Temple). With the relocation of KEPCO from Samseong-dong to the outskirts of Seoul in November 2014, a huge piece of land, covering 122,000 square meters, became available. This inspired new possibilities and created great potential for this piece of land, now totaling 720,000 square meters, including the COEX and Jamsil Sports Complex.

In the past, Seoul has been selected as the “Best City for International Business Meetings” for two consecutive years and ranked among the “Top Five Cities for Conventions” for three consecutive years. In 2013, the number of foreign visitors to Seoul exceeded 10 million for the first time; however, despite the fact that it is one of the top five cities in the MICE industry, Seoul still lacks related infrastructure.

The stadiums of Jamsil Sports Complex, a shrine for the 1988 Seoul Olympics, which was held more than 30 years ago at a time when the Korean people dreamed of building an advanced country, have now become old and inconvenient, and the beautiful surrounding areas, located along the nearby Hangang (River) and Tancheon (Stream), have been tarnished by parking lots and roads, thereby losing their ecological value.

Seoul International Complex will become a venue for business and MICE, infused with tourism, culture, and leisure, and by promoting international exchange, will be loved by Seoulites and frequented by people from all around the world. It will become a new center of Seoul.

As this area is the center of Korea’s MICE industry, its second function is to support this industry. In the MICE Development Master Plan announced in 2013, the Seoul Metropolitan Government laid out its plan to specialize the different regions of Seoul, and designated certain areas for infrastructure construction. Also, an additional 83,000 square meters of land will secured and developed into a “Urban MICE Complex Cluster” overflowing with diverse and vibrant facilities, distinguishing it from other major MICE cities, such as Singapore.

Its third function is sports. The Jamsil Sports Complex is symbolic as the venue of the 1988 Seoul Olympics, but as it is now more than three decades old, its facilities have become largely obsolete. Therefore, the Seoul Metropolitan Government plans to improve and modernize these facilities to create a mecca of international and professional sports events.

Its fourth function is culture and entertainment. As this area is developing into a new hub of Hallyu (Korean Wave) culture, including Psy’s concert performances and K-pop, the Seoul Metropolitan Government intends to expand the cultural infrastructure and add additional facilities, making it the center of Korea’s pop culture industry.

By upgrading its current resources and assets and linking business, tourism, meetings, sports, and culture, Seoul will become one of the greatest multi-purpose MICE cities in the world. Moreover, by transforming Jamsil Stadium into a park and connecting the Hangang (River) and Tancheon (Stream), it will become a city with one of the most beautiful river parks. Seoul will be transformed into a green city designed for pedestrians, with integrated public transportation systems, as well as a truly international destination.

The construction of Seoul International Complex will be carried out under two general categories: public and private. The public category includes the land where KEPCO and the Seoul Medical Center used to be located and will see this land developed with a focus on the public interest, in accordance with a development guideline established for this sole purpose. Once the legal procedures for modifying the city management plan are completed, the development work under the private category will begin.

The public development section alongside Jamsil Sports Complex will be developed only after the Seoul Metropolitan Government gathers the opinions of both the people and experts, and after forming a social agreement, it will push the project forward phase by phase. In principle, private investment will be solicited and public contributions* utilized in order to minimize financial injections from the city budget. As soon as specific details are determined, including the project method, timing, and procedures, the city management plan will be finalized, and the project will get underway.
* Public contribution: Facilities, land, or cash (agreed to and decided by the private and public sectors) contributed by the land owner as a way of sharing costs related to necessary infrastructure improvement and planned gains in the event the development density on his or her land increases due to a change in city planning