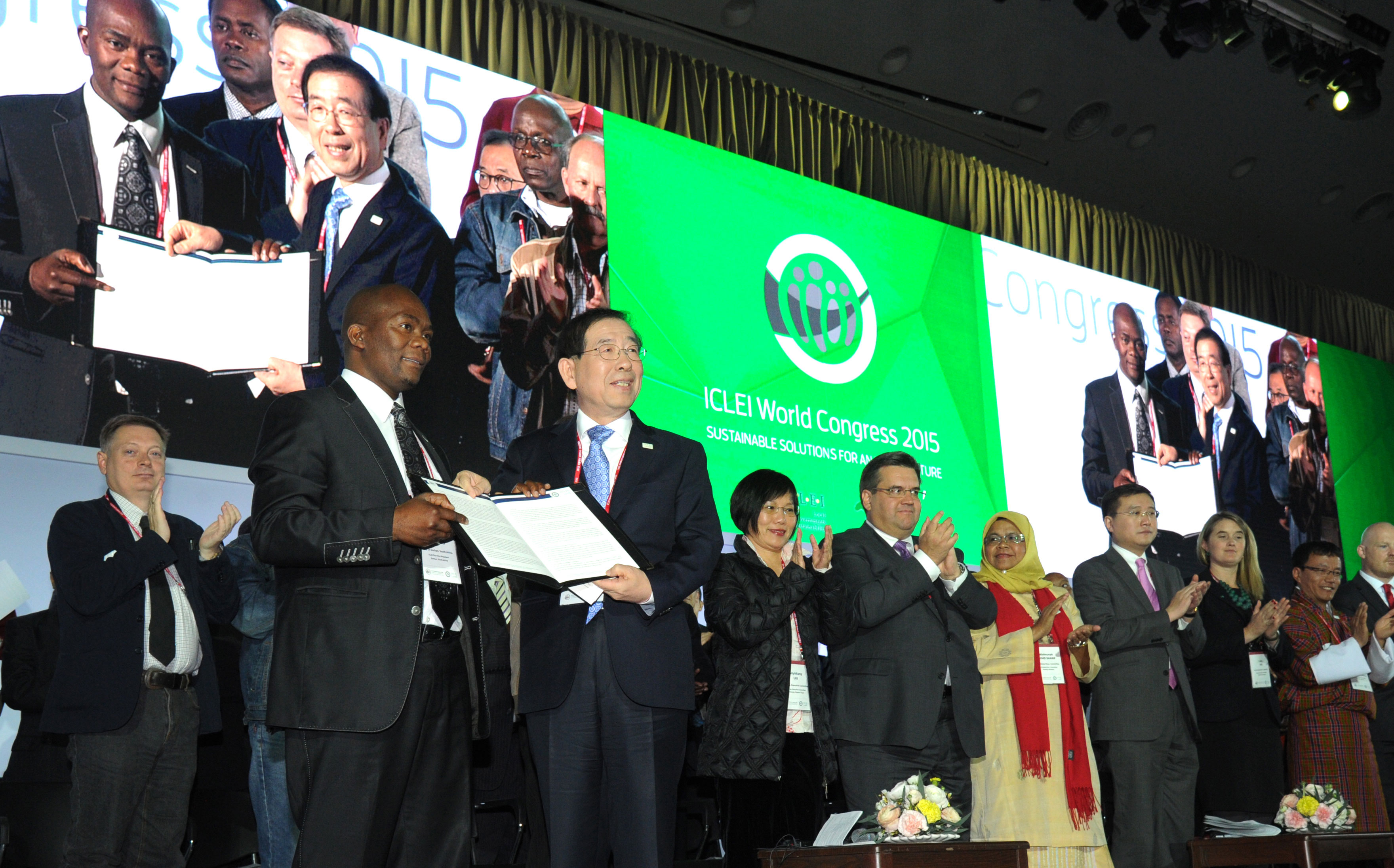 Aiming to strengthen local governments’ capacity for environmental autonomy, the Seoul Metropolitan Government joined ICLEI-Local Governments for Sustainability, which was founded in 1990, in May 1999 and continues to be an active member today. 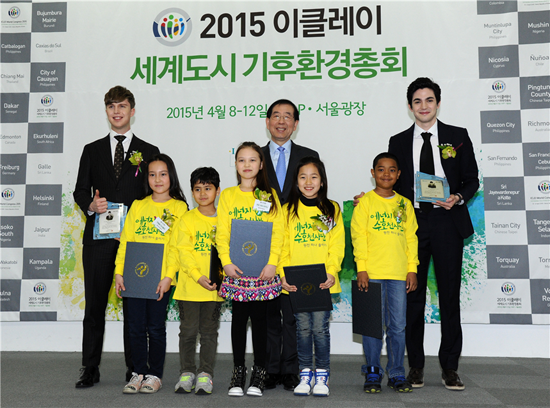 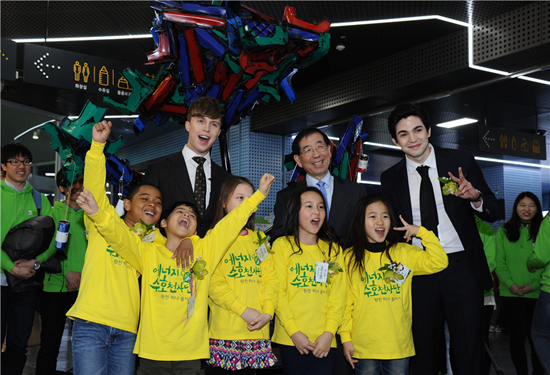 ▷ Results of the ICLEI World Congress in Seoul

Over four days (April 8 to 11), more than 127,000 citizens participated in the sessions of the ICLEI World Congress held in Seoul Plaza and at the DDP, and visited the Climate Change Experience Exhibition. In addition, a total of 291 business talks were held between 114 Korean companies and 61 buyers from 26 countries.

This year’s ICLEI World Congress was the largest ever, with participants from 204 cities in 87 countries (76 mayors, 26 vice mayors, and 102 delegations), as well as 190 foreign organizations. Also, along with the foreign cities, a total of 36 Korean cities, including Suwon and Changwon, participated in the Congress to stimulate the efforts to address climate change.

Most importantly, the participants adopted the Seoul Declaration, which sets out nine urban agendas for cities to respond to climate change and spread the importance of the role of local governments and cities prior to the New Climate Regime, which will be launched in 2020. The Seoul Declaration will be a milestone for all cities in the world, based on which they will establish their own action plans to address climate change.

Along with the achievements of cities participating in the Compact of Mayors, in terms of greenhouse gas reduction, the Seoul Declaration and Seoul Action Plan, which were adopted at this Congress, will be presented to the heads of states at the annual UNFCCC Conference of Parties in Paris in December.

The Seoul Action Plan sets out concrete plans to strengthen the bonds between city networks, such as the ICLEI, C40, and UCLG, and for setting greenhouse gas reduction goals and measures to carry out and expand the “Compact of Mayors.” It also addresses the formulation of a climate change adaptation plan and support for capacity development. Supported by Michael Bloomberg (UN Secretary-General’s Special Envoy for Cities and Climate Change), UN-Habitat, and organizations related to the Compact of Mayors (ICLEI, C40, UCLG), the action plan aims to provide an important opportunity to take specific action toward reducing greenhouse gas emissions on a completely new level.

In addition, Ahmed Djoghlaf, the co-chair of UNFCCC’s Ad Hoc Working Group on the Durban Platform for Enhanced Action, stated that the Seoul Declaration will become a great example of practical goals leading to plans and implementation at the Paris COP. He also promised to express the determination of all cities to implement the actions at the Paris COP and expressed his hope for Seoul as the presidential city of the ICLEI.

Zhang Xinsheng, the president of the International Union for Conservation of Nature, remarked that Seoul is establishing itself as a global role model in terms of sustainable urban growth. He also emphasized the importance of cooperation in Northeast Asia and energy reform, and expressed that the central government as well as local governments, including Seoul Metropolitan Government, private companies, civic groups, and the press, must work together to change the fate of the Earth, which is facing a critical turning point.

<Mayor of Seoul Elected as President of ICLEI until 2018>

Seoul Mayor Park Won Soon was elected as the new president of the ICLEI, the largest network of cities in the world. He is the first Asian president of the organization, and as the president, he will chair related board meetings and global executive committee meetings and participate in major intergovernmental conferences and high-level international events, such as the UN General Assembly and UNFCCC COP, in order to foster the strength to address climate change.

At the opening ceremony, Seoul Mayor Park Won Soon remarked, “We will strengthen the ICLEI’s function as a platform for sharing Seoul’s successful, sustainable urban policies with other member cities and spread model examples of member cities to the rest of the world.” He added, “A cooperative network among cities is essential in resolving the problems that humanity now confronts, such as the depletion of resources, environmental pollution, and climate change.”

<April 9: A Total of 291 Consultation Meetings>

At the Consultation Fair for Environmental Projects to Address Climate Change, held at the Seoul Plaza Hotel, 114 Korean companies and 61 buyers from 26 countries discussed the export of goods and services. Hosted by the Seoul Metropolitan Government and KOTRA, the conference was held alongside the ICLEI World Congress to inform the world of Korea’s outstanding eco-friendly products and green technology and to expand overseas markets. A total of 291 consultation sessions were held at the fair.

The Seoul Metropolitan Government announced its commitment to reduce greenhouse gas emissions by 40 percent (compared to 2005 levels) by 2030 (April 7). In order to achieve a reduction of 10 million tons in greenhouse gas emissions by 2020, the Seoul Metropolitan Government is currently running a campaign to secure a reduction of one ton of carbon dioxide per person.

Also, on this day, Montreal became the first Canadian city to participate in the Compact of Mayors, and announced that it will use renewable energy to supply over 90 percent of its total energy needs. The city also announced a specific plan to reduce greenhouse gas emissions by 30 percent by 2020, in order to restore air pollution levels to what they were in 1990.

The World Cities Summit Mayors Forum is differentiated from the Compact of Mayors and Seoul Declaration, which are a declaration and a guideline, as it offers greenhouse gas reduction goals and methods for each city. This year’s Mayors Forum is expected to contribute to strengthening the Intended National Determined Contribution (INDCs) of each nation to the UNFCCC by having cities and local governments propose their own greenhouse gas reduction goals before reaching an agreement among nations. The World Cities Summit Mayors Forum plans to hold the forum regularly and accelerate action to address climate change on a local level through the Compact of Mayors for “Post-2020” by eliciting participation from a greater number of cities.

Along with Energy Guardian Angel Corps, as well as companies, citizens, and civic groups, over 70 mayors of cities around the world marched along the pedestrian street in the middle of Dongdaemun, shouting “Stop CO2, Save the Earth!”

“Seoul’s Pledge to Address Climate Change” is a comprehensive strategy with 36 tasks in ten areas (energy, atmosphere, transportation, resources, water, ecology, urban agriculture, health, safety, and urban planning). The action plan to reduce greenhouse gas emissions was proposed by civil society, supplemented by Seoul researchers through online and offline surveys of citizens in all areas of society, and supported administratively by the Seoul Metropolitan Government.

MOUs were divided into two categories: friendly cooperation and environment. Environmental MOUs were signed between Seoul and 11 cities in numerous countries, including the Philippines, Malaysia, and Colombia, in order to lay a foundation for the export of Seoul’s outstanding eco-friendly policies and technologies. 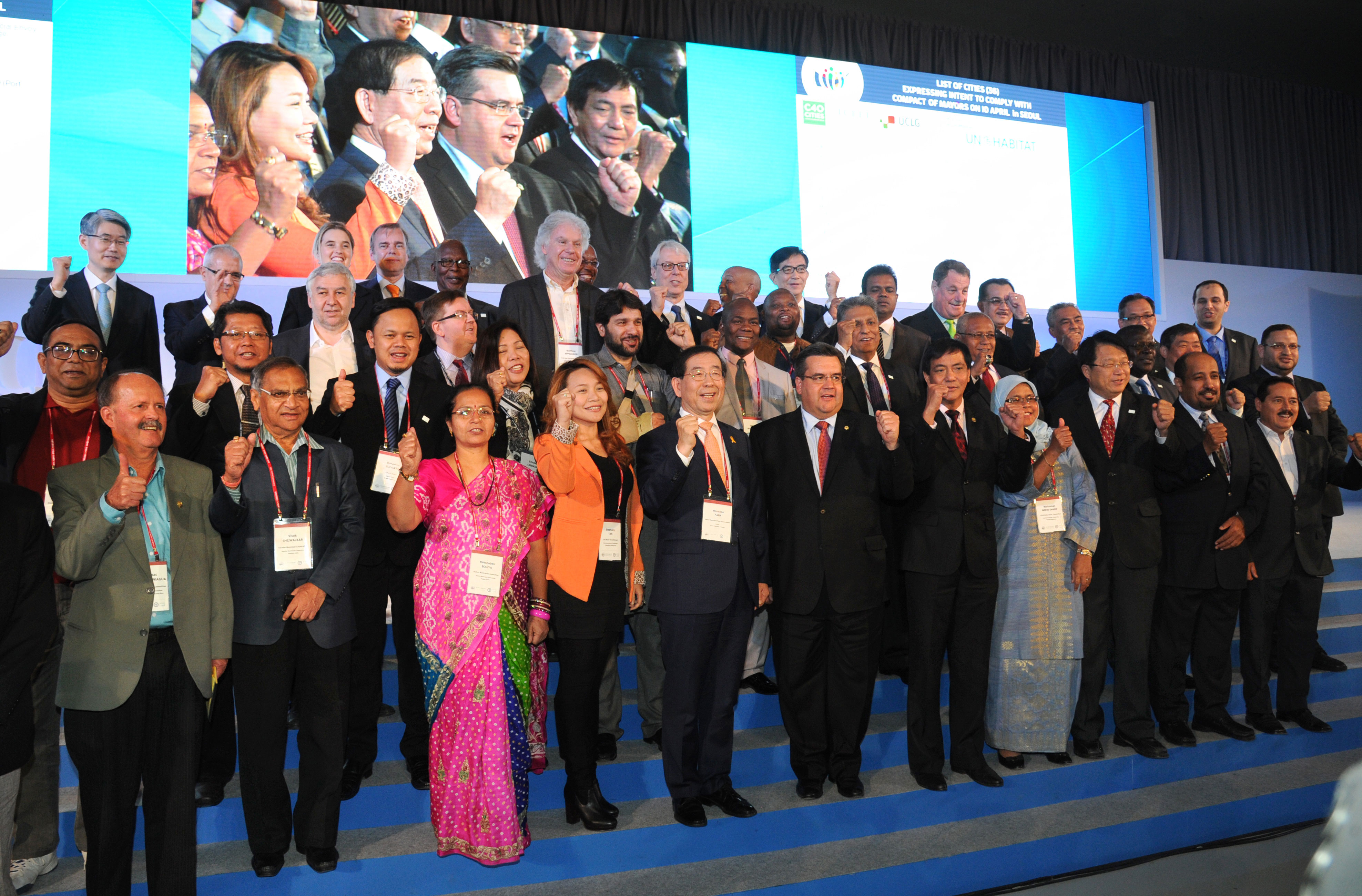