In May 2014, the Seoul Metropolitan Government announced the “Seoul Business Incubation Center Improvement Plan.”Recently, interest in startups has risen as a countermeasure for jobless growth. However, only three out of ten companies (29.6%) survive beyond their initial five years, and even then, such startups tend to be in the already saturated fields of wholesale and retail, lodging, and the food industry, merely eking out a hand to mouth existence.

Moving away from a quantitative selection of new startups, and in order to provide uniform assistance, the “Seoul Business Incubation Center Improvement Plan” focuses on selecting and offering support to startups with high potential for success. It also concentrates on developing an infrastructure to support startups, which encompasses the conceptualization and commercialization of a business: from forming ideas to operating and maintaining a business. This plan will be implemented for the 6th Youth Entrepreneur Project, the participants for which will be selected in July.

First, the Seoul Metropolitan Government will offer different levels of assistance for different people, depending on the stages of the development of their startups. Previously, 1,300 groups of prospective entrepreneurs were selected to receive fixed amounts of financial assistance, which encompassed costs for spaces, consultations, and activities. According to the improvement plan, 3,000 teams of prospective entrepreneurs will be given membership on a rolling basis. They will be provided with an “Open, Communal Business Incubation Space,” as well as “Training Sessions and Seminars.” Among those teams selected, the 500 with the highest potential will be given focused coaching, assistance in financing startups, and smart office spaces. Afterwards, the 200 teams with the best results will be provided with financial assistance in the form of investment, as well as an independent space for their startup and highly customized mentoring services. Finally, the 100 most successful startup teams will be selected. The Seoul Metropolitan Government will support these 100 teams from the stage of attracting investment to opening a market.

In addition, the plan will lay more emphasis on startups in new and fertile fields instead of those already saturated sectors, such as wholesale, retail, and the service areas. The city government will provide assistance to the selected 500 teams planning on “opportunity pursuing” startups in the following categories: 1) Technology—IT, BT, and NT, 2) Knowledge service—design and BS industry, 3) Urban manufacturing—jewelry, handmade shoes, etc., and 4) Socio-Economy—social enterprises and cooperative associations.

Secondly, the city government will select prospective entrepreneurs periodically, and on a rolling basis, instead of once a year. This will allow future entrepreneurs to receive assistance when they need it. Furthermore, the selection process will not be limited to applications and interviews but will be changed to include competitions and in-depth interviews to discover hidden talent.

Third, the Seoul Metropolitan Government will provide open, public spaces for business incubation, as well as an assistance program to all citizens who interested in their own startup. The open spaces and tech shops, which formally were only accessible for some of the startups at the Business Incubation Center, will now be completely open to the public. The city government will also provide training and consultation sessions, and networking programs.

In addition, the city government will provide support for foreign students studying in Korea as well as foreigners residing here to undertake their own startups by designating a base for startup activities, promoting the exchange of startup ideas, and networking with experts. By connecting private assistance institutions to the prospective entrepreneurs so as to provide mentoring and consultations, the city government will strengthen the effectiveness of its startup activities.

Fourth, an infrastructure for providing assistance to startups will be put in place. The plan will focus on assisting startups throughout the whole process of starting a business, including “attracting investment,” “distribution and marketing,” and “expanding into overseas markets.”

Fifth, the startup assistance period will be doubled from three years to six years, including a year at the Business Incubation Center. Afterwards, startups will continue to receive support contingent on their growth and development.

Sixth, the Seoul Metropolitan Government will provide the “Once Again” Program that focuses on giving entrepreneurs with failed startups another chance of success. The program will offer opportunities to “change perceptions” and “foster successful businesses” to 200 teams, which is a significant increase over the 34 teams from the previous year.

Seventh, the plan will include an investment system to promote the easier financing of startups by expanding beyond loans and having different investment companies and investors to move into the Business Incubation Center.

Eighth, the Seoul Metropolitan Government will expand the existing offline market to include an online presence as well and will assist the expansion of distribution channels and marketing activities of startups by hiring a marketing manager. Currently, startups that have finished the program at the Youth Business Incubation Center can display and sell their products in the Youth’s Dreaming Shops in Shinchon and Myeong-dong. The city government will support the diversification of the distribution channels and marketing activities through major distribution companies, such as “D-Cube City” and “Mirinae Store.”

Ninth, the Seoul Metropolitan Government will create a close network of private institutions that support business incubation and universities for the operation of the Business Incubation Center, which has been independently operated by the city government until now. This will create a synergy in supporting prospective startups. By cooperating with private institutions, the city government will offer mutual assistance in providing spaces, programs, and infrastructure, as well as in the selection and training processes. The city government will also pursue cooperation with universities to allow the startup teams to access academic business incubation and training centers and research centers.

Lastly, the centers will be operated voluntarily by startup teams instead of by the government. The Seoul Metropolitan Government will provide guidance to startup teams in the creation of an independent community with official and unofficial groups so that the startups take charge of holding representative meetings and running training sessions, lectures, and investment programs.

‘ASPIRIN Center’ Opens The improvement plan will first be trialed on the ASPIRIN Center, which is a business incubation center that focuses on resolving future social issues. ASPIRIN stands for “Advanced Startup Program for Innovative Remedies to Illnesses of the Next Society,” meaning that the center will provide advanced business incubation programs seeking to develop innovative measures to resolve the social issues that might arise in the future. It also signifies that the center will ease people’s sufferings from social problems and issues – a social aspirin as it were.

In May 2014, the selected 15 prospective startup teams began to move into the center. These teams will work on startups that focus on resolving future problems, such as energy and environmental issues. 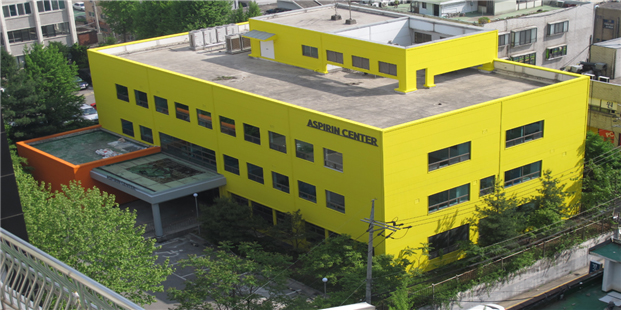