• Seoul Metropolitan Government’s countermeasures for flood damage is being refined by improving on-site disaster response system based on the participation of citizens in the sites of flooding by unusual weather and thoroughly preparing for the individual problems of major areas vulnerable to flooding such as Sadang, Gangnam, Dorimcheon, and Gangnam Station. In addition, small-scale flood-preventing facilities have been
installed at 41,084 underground residential housing in low-lying land, shopping arcade, and factories up to 2013 with a plan to install the facilities at 4,750 households additionally in 2014.

• Last year, the ‘automatic water blockade’ was set up at 4 places at the entrance of inside roads near Sadang Station for the first time in Seoul to block the rainfall flowing into the road using a button. In addition, the 60,000-ton scale rainwater retaining facility constructed near the area will be actively used in this year, too, to continue to minimize the flood damage in low-lying land.

• Furthermore, the water level of sewer pipes and the situation of the broadcasting for emergency evacuation will be monitored regularly in real time using the fixed CCTV and movable cameras installed at important areas in a composite way to cope with the on-site situation in real time. Before the raining season in 2014, the integrated management system will be upgraded using the rain gauges in Gyeonggi region adjacent to Seoul (22 places), the rain gauges which will be added at the peak of important mountains (13 places), the establishment of rainwater retaining facility integration system (17 places), and upgrading the integrated management system of the lock gates in the Hangang (River) (32 places) in order to reinforce the ability to cope with disasters.

When it rains heavily, all the rainfall in the areas of Umyeonsan (Mountain), Gwanaksan (Mountain), etc. flows into the area of Sadang Station, the lowest land, at a time to cause flood damage. To minimize the damage, the ‘'automatic water blockade on road’ was installed for the first time in Seoul and a large-scale rainwater retaining facility was constructed, too.

In front of the main gate of SNU

• In 2011, the localized torrential downpour in Gwanaksan(Mountain) area caused overflow of the stream at Seorim-dong located upstream with sharp curve of the stream. So, to control the flood at Dorimcheon (Stream), local residents, civil groups, and the concerned party of SNU had hot discussion on the best spot for the location of the rainwater retaining facilities and agreed to the installation of a 60,000-ton (primarily 40,000-ton) facility in front of the main gate of SNU and another 25,000-ton facility within the campus of SNU.

• In July, 2013, Sillim 3-gyo, which had the worst bottleneck situation near Dorimcheon (Stream), was demolished to improve water flow capacity by expanding the section of water flow.

• In Gangnam area, the flood damage is the gravest at the crossroads near Jinheung Apartment. In this area, the 15,000-ton scale Yongheori rainwater retaining facility will be operated during heavy rainfall to treat the road runoff of water up to the height of a car.
In addition, the plan for the solution of the flood problem in Gangnam Station area will be finalized after discussion and careful examination of experts, and then the optimum plan that will change the flow of sewage gathering to Gangnam Station area will be put into construction after precision inspection and design review.

• Many important facilities of the nation are concentrated in Gwanghwamun area, but the lack of water flow capacity of the sewer pipe in Baegundongcheon (Stream) which concentrates Gwanghwamun area is causing flood. Especially, the ‘ㄷ’-shaped sewer pipes located at Gwanghwamun Station and Gyeongbokgung Station are making flood worse due to structural problem.

• Seoul city laid 140m sewer pipe in 2011 and 2012 to secure additional space for water flow for the ‘ㄷ’-shaped sewer pipe at Gwanghwamun Station crossroads and newly installed 260m pipe at Gyeongbokgung Station crossroads in 2013 to change water flow excluding the flow from upstream in order to lessen the burden of the ‘ㄷ’-shaped sewer pipe.
In addition, the sewer pipe improvement project to secure the water flow capacity of Baegundongcheon (Stream) will be reviewed in 2014 and put into construction until 2016 for the achievement of the goal of disaster prevention (95mm/hr for the pipe at main road) in Gwanghwamun area.

• Meanwhile, the project of the construction of rainfall management facility is being implemented side by side with water control countermeasures in order to recover the water environment in the representative urban space. The Green-Blue Roof, Rain Garden, and the penetrating type street inlets introduced in 2013 as pilot projects will be expanded continuously to reduce the burden of sewer pipe at downstream and recover water recycling by retaining and penetrating the rainfall on public land by itself. 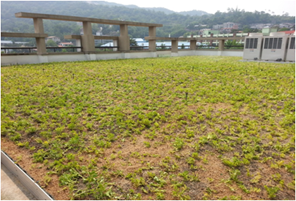 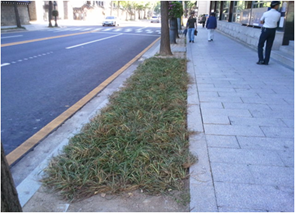 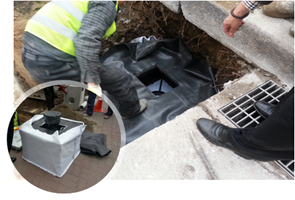 5. Sinwol area: Installing rainwater retaining and draining facility of 3.6km in length and 7.5m in diameter for the first time in Korea

• Seoul Metropolitan Government is installing a rainwater retaining and draining facility of which length of main line tunnel is 3.6km (diameter: 7.5m) and the leading tunnel is 1.97km (diameter: 4.0m) in order to solve the chronic flooding problem in Sinwol area which has an extremely irregular height of sewer pipes under the main road which leads to Mokdong pump station. The construction began in May, 2013 for the primary work of water outflow station, and will alleviate worries about flooding for 4,700 underground residential housing and 1,300 arcade and factories in Sinwol area by completing the project before the rainy season in 2016.