To get to the outskirts of Seoul, the following four stations can be used: Seoul Station, Cheongnyangni Station, Yeongdeungpo Station, and Yongsan Station. 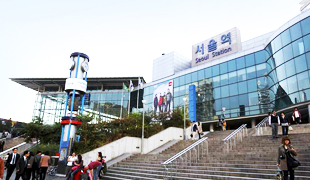 Seoul Station is the starting point for the Gyeongbu Line, the Gyeongui Line, and Incheon International Airport, and it connects to Subway Lines  1 and 4.

Yongsan Station is the last station on the Honam Line, Jeolla Line, Janghang Line, and Gyeongwon Line. It is also a subway station of Line 1, and is located between Namyeong Station and Noryangjin Station. It is the first and last station of the metropolitan Jungang Line.

Cheongnyangni Station is on the Gyeongwon Line, and is located between Wangsimni Station and Hoegi Station. It is also the first and last station of the Jungang Line.

This is a train station on the Gyeongbu Line. It is located between Singil Station and Sindorim Station of Seoul Subway Line  1.