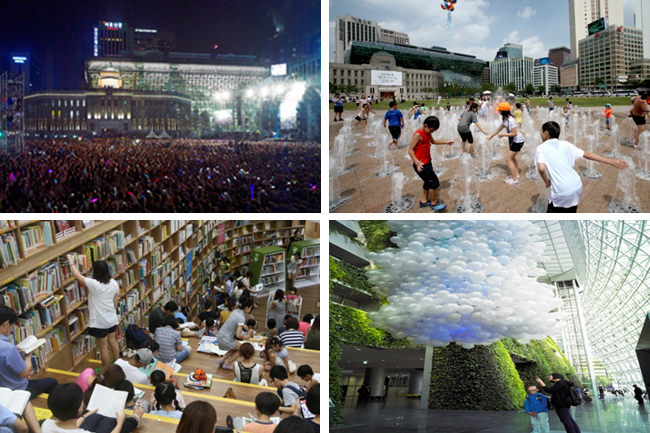 Watch the Video on the Tong-Tong Tour Guide

The Tong-Tong Tour is the official tour of Seoul City Hall. A Seoul culture tour guide takes visitors on an hour or an hour and a half-long tour around the City Hall building, the Citizens’ Hall, and the Seoul Metropolitan Library. The tour highlights the traces of history throughout the City Hall, as well as the Green Wall, which is listed in the Guinness World Records; the restored mayor’s office; Gungisi Relics Exhibition Hall, which displays relics from a Joseon Dynasty armory that was discovered during the construction of the new Seoul City Hall; and stories about the construction process of this unique building.

One of the most popular places is the old mayor’s office on the third floor of the Seoul Metropolitan Library, and the Green Wall in the lobby of the City Hall. The Green Wall was listed in the Guinness World Records for its massive size.

The old mayor’s office and all the materials and items from the early 20th century that it contained were restored to their original condition. There, visitors can see the traces of the former mayors of Seoul, dream of one day becoming the mayor, and have their picture taken at the mayor’s desk.
Students can enjoy an educational experience at the excavation site of Gungisi, an armory from the Joseon Dynasty, and the Gungisi Relics Exhibition Hall in the Citizens’ Hall, where students have the opportunity to assemble an old canon. The Gungisi Relics Exhibition Hall showcases the items and relics discovered during the construction of the City Hall, including Bullangijapo (a type of gun), which has been designated as Treasure No. 861-2.

Also, there is a special place that only members of the Tong-Tong Tour can visit. Tour members are allowed to enter the front of the mayor’s office, on the sixth floor, which is not open to the public. The guide will tell the visitors the “Story of the Mayor’s Office” to satisfy their curiosity of the inside of the office. There is also a photo zone where visitors can have their pictures taken with the mayor.

When taking the escalator down from the mayor’s office on the sixth floor to the first floor, visitors are recommended to take a picture of the Green Wall and “Meta Epic: SeoBeol,” which nicely complement the inside structure of the City Hall building. It is truly a breathtaking sight.

Online Reservation for the Tong-Tong Tour: