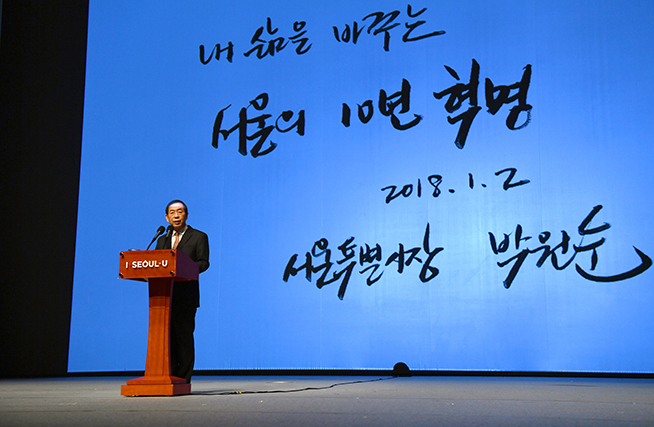 Change Each Citizen’s Life for the Better:
The 10-Year Revolution of Seoul

Dear citizens of Seoul, and fellow officials of the Seoul Metropolitan Government, Last year, we opened a new era for Korea together. We gathered at the ‘candle plaza’ for months and asked the government, “Is this what our country is all about?” Our convictions changed the fate of the entire nation. The regime change was a victory for democracy, a victory for common sense, and a victory for the future.

The year 2018 has now dawned.
The incumbent Moon Jae-in administration has declared that government policies are meaningless unless they change citizens’ lives for the better.
As such, the national policies are currently directed toward improving people’s lives in a thriving Korea. The reason is that we are faced with a desperate reality. The sense of community has dissolved. Lonely deaths are on the rise. Too many identify themselves as “gold” or “dirt” according to the Spoon Class Theory, reminding all of us about the state of our society. However, in cooperation with the national government, the Seoul Metropolitan Government will put the highest priority on the welfare and prosperity of its citizens in 2018. Beyond the era of individualism, we will open an era of social friendship through the restoration of community.

1. Past 6 Years on a Happy Journey to Change Citizens’ Lives

We have already spearheaded changes in Seoul over the past six years.
Seoul is a great city. Seoul is not a city of giants, steered by a handful of capitalists and vested interests. It is ordinary citizens who have always been the ones to make history in Seoul.

Seoul once invested heavily in construction instead of people.
The city considered welfare benefits a waste of money.

In 2011, however, the citizens chose a different path for their municipal administration.
As a candidate, I promised to bring an end to the time when citizens existed for the city and start an era when the city would exist for the citizens.
I pledged to become ‘the first mayor to change everyone’s life for the better.’
My commitment has resulted in significant changes in Seoul in cooperation with its citizens and my fellow officials in the Seoul Metropolitan Government.

For the past six years, the Seoul Metropolitan Government has run all its municipal affairs based on its governance philosophy, treasuring citizen engagement, innovation, and communication.
Over the past six years, Seoul has invested in citizens’ lives.
What Seoul has done during those 6 years is make investments in people.
As a result, Seoul reduced its debts by half while doubling its welfare spending during this period.
Seoul has successfully opened the era of universal welfare and made a paradigm shift toward the delivery of welfare benefits to potential beneficiaries.
Seoul has indeed changed the paradigm of urban development over the past six years.
Seoul is no longer a city that keeps repeating demolition and construction. It is a place where everything is recycled.

Through investments in people, the competitiveness of Seoul has jumped over the years.
While Korea’s competitiveness has dropped to 26th, that of Seoul has risen to 6th in the world.
Furthermore, Seoul is connected to the rest of the world more broadly than ever.
Seoul joins forces with global cities to promote the sustainable and inclusive growth of the city.
The dream that Seoul has made come true is expanding across the country and to the rest of the world.

Still, the Seoul Metropolitan Government has made considerable achievements.
Seoul’s happy journey to change citizens’ lives has brought about the intended results only because its citizens and my fellow officials have fully supported the metropolitan government’s new policies.

The new central government of Korea has joined the Seoul Metropolitan Government’s effort to improve the quality of its citizens’ lives, which began six years ago.
Seoul’s policies have now become the new central government’s policies.
Seoul’s innovations have now become the nationwide standard for innovations.
To be exact, 59% of the tasks that the Seoul Metropolitan Government has proposed to the central government are reflected in the new president’s campaign promises.
Seoul’s policies, including the regularization of irregular workers, support of outreach community centers, and expansion of national/public childcare centers, are spreading across the country.

It is time to create the country’s first city that changes the quality of its citizens’ lives.
Our earnest efforts over the past six years have turned out to be not enough to upgrade the quality of life of ten million citizens.
Thus, armed with greater responsibility, Seoul is about to set off on an even more ambitious journey.
Seoul’s tomorrow must be built on its six-year achievements.
Seoul’s tomorrow must be an evolution, instead of a mere mathematical accumulation of past accomplishments.

First, Seoul must invest in people.
The young must not fear falling in love, getting married, and creating a family. Too many citizens equate having children to giving up on their career success.

The term ‘low-birth rate society’ is not enough to depict the entire problem.

The real issue is that women have to sacrifice their lives just because they have given birth to children.
Seoul will definitely change the lives of women in their 30s.
Seoul will build a model of joint responsibilities for its citizens who have and care for children.
The responsibility for childcare must be shared by individuals and the nation.
In 2018, the Seoul Metropolitan Government will begin to implement ‘the joint childcare scheme’ and strive to get the central government to accept and implement it nationwide.

We will invest in the young people in love so that they will no longer have to fear loving someone and starting a family.

Seoul, the First City to Change Citizens’ Lives, is a city where the young can fall in love without worries.

② Seoul invests in the future

Second, Seoul makes investments in its future.
As a way to eliminate inequality and imbalance, we have declared and implemented ‘WEconomics’ – the economy for all.
For the past six years, we have created ‘Seoul – a city of economic democracy’ and ‘Seoul – a city respecting workers’ rights’ while investing in the future of our youth.
The push for economic democracy and respect for workers’ rights that started in Seoul has now expanded to the entire country.
Seoul will not stop its honorable movement towards the elimination of inequality and imbalance.

The world is now faced with the mega trends brought on by the Fourth Industrial Revolution.
No one can grow without innovation. Without growth, no one can implement the distribution of wealth.
Seoul intends to realize an economy for all through innovative growth.
In support of the central government’s innovation-oriented economic policies, Seoul has launched Seoul-style innovative growth projects that create a number of jobs.
Seoul has designated its hubs for the five most promising industries, biotech, R&D, MICE, urban manufacturing, and cultural contents. It will create a startup-friendly ecosystem where innovators from all around the world will gather.
To combat climate change, Seoul is becoming a City of Sunlight.
Over the past five years, Seoul has generated an amount of energy equal to two nuclear power plants and reduced the amount of usage through citizen engagement.
By 2022, Seoul is planning to generate 1 gigawatt, or 1,000 megawatts, of electricity from solar power, which is equivalent to the electricity produced by one nuclear power plant.
By then, one in every three households in the city will be producing solar energy.
Seoul’s pledge has also expanded to the ‘Ambitious City Promises’ project.
Seoul’s promise to reduce greenhouse gas emissions 10 million tons by 2020 has been applied to low-carbon urban development in Southeast Asia for the first time in the world, courtesy of the support of the German government.
Seoul’s challenge has played a leading role in the shaping of the new central government’s energy conversion policy in Korea, while serving as an outstanding example for the international community.

Seoul invests in the next generation.
Seoul will expand its programs for youths, such as the youth allowance, public housing for students, and the New Deal Employment for Youth.
Seoul also makes investments in the 50-plus generation, another future generation of the city.
The Seoul 50 Plus Foundation helps the city’s citizens over 50 to design a productive post-retirement life.

Seoul intends to respond actively to diverse family types according to changes taking place in its demographic structure.
Seoul will provide various support measures to single-person households and multicultural families, among others.
Diversity is what sets Seoul apart from many other cities.

Seoul, the First City to Change Citizens’ Lives, is a city with a sustainable future.

Third, Seoul makes investments in peace.
The tension between the two Koreas, as well as the instability in Northeast Asia, are adding to the “Seoul discount” effect.
The Seoul Metropolitan Government will always support the Moon Jae-in administration’s efforts to bring peace on the Korean Peninsula.
Peace and connection are the two key words that will ultimately govern inter-Korean relations.
Seoul Station has a big signpost saying that it is the starting point of the Trans Eurasian Railway, which will connect Seoul to the European continent beyond the northern end of the Korean Peninsula. In this way, Seoul will be a platform for global citizens, rather than an island cut off by its northern neighbor.
With such a bold vision, Seoul will lay the groundwork for inter-Korean exchanges and urban diplomacy in the international community.

Seoul has been able to maintain peace for the past 68 years thanks to its citizens’ hard work and sacrifices for the city’s achievement of prosperity and safety.
Seoul is now recognized as the best venue for international conferences, with more than 13 million people having visited the city.
Seoul is a city of peace, thriving with global citizens.

Seoul, the First City to Change Citizens’ Lives, is a city of peace.

3. The 10-year Revolution and Park Won-soon

Dear citizens of Seoul, and my fellow officials of the Seoul Metropolitan Government.
Each and every citizen of Seoul is entitled to live a happy life regardless of the situation he or she faces.
Citizens of Seoul, a city of new life, ally and cooperate with others based on social friendship.
Social friendship empowers an individualistic society to restore its spirit of community.

I have tried to link what I thought six years ago with what I have planned for the future.
I believe that, in 10 years, even rivers and mountains change. It takes 10 years to change the course of one’s life.

I began to prepare six years early.
The 10-year revolution is a big shift that changes the course of my life. It is also what completes Seoul, the first city that has changed the course of our lives.

We are dreaming of a greater city together.
Seoul will strive to be up to par with Tokyo, Paris, and London and be recognized as a city with the world’s best quality of life.

Dear citizens of Seoul, and fellow officials of the Seoul Metropolitan Government.
The 10-year revolution of Seoul will change the quality of life of each and every citizen of Seoul, but it can only be completed successfully with your full support.
Let us set off on a happy journey together to better lives in 2018.